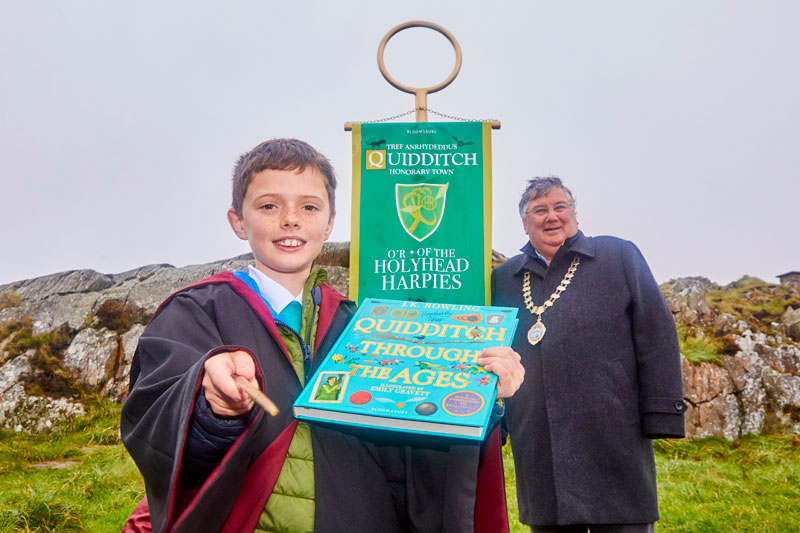 MONDAY 5TH OCTOBER 2020, UK – Holyhead was recognised as an Honorary Quidditch Town this morning in celebration of the new book, Quidditch Through The Ages Illustrated Edition, an essential companion to the Harry Potter series and guide on the wizard’s favourite sport.

The Mayor of Holyhead, Councillor Alan Williams, was pictured next to the banner in an outdoor, socially distanced presentation with two young Harry Potter fans at South Stack on Holy Island, Anglesey's most westerly point, lying three miles to the west of Holyhead. During the official presentation, the young Harry Potter fans celebrated on their Nimbus 2000 broomsticks amid stunning views of the lighthouse and cliffs which are inhabited by large colonies of seabirds.

Over the next three days, Honorary Quidditch Town presentations will continue safely and in line with government guidelines across the UK and Ireland. The ceremonies are being held at prehistoric sites, stone circles, medieval castles, Roman forts and churches, celebrating the release of Quidditch Through The Ages and the real-life towns represented by Quidditch teams in the Harry Potter series. In these challenging times, people planning a visit to Holyhead or any of the Honorary Quidditch Towns should check the guidelines and rules of the government, local authorities and specific tourism attraction before making the trip.

In total eleven towns and villages across the UK and Ireland, from Appleby to Wigtown, Ballycastle to Wimborne, are being honored in celebration of the new book, Quidditch Through The Ages Illustrated Edition, an essential companion to the Harry Potter series and guide on the wizard’s favourite sport.

A spokesperson from Bloomsbury Publishing said: “We’re really proud to recognise Holyhead as an Honorary Quidditch Town alongside ten other towns and villages across the United Kingdom and Ireland. Quidditch captured the imaginations of children and adults across the world, and the new book Quidditch Through the Ages, beautifully illustrated by Emily Gravett, is a magical companion for those who want to immerse themselves in the wizarding world of Harry Potter.”

“Harry Potter fans can now unearth the real-life towns and villages inspiring the names of Quidditch teams and we ask anyone planning a visit to Holyhead to first check national and local travel guidance on coronavirus to ensure their visit is made safely. For communities that are currently experiencing stricter measures, we encourage people to support their favourite Quidditch team virtually by visiting the official Harry Potter fan club, Wizarding World.”

Cllr Alan Williams, Mayor of Holyhead said “On behalf of Holyhead Town Council we are delighted to be chosen as an Honorary Quidditch town. Children and adults have dreamt of playing Quidditch since first seeing it in the Harry Potter films and this decorative banner with the town’s team colours shows our support for the Holyhead Harpies Quidditch team”.

Joe McClymont, a ten-year-old pupil at Ysol Cyci Primary School said: “I’m really excited to have the banner here in Holyhead. It’s great that my town has a connection to Harry Potter.”

*Due to the local lockdown in Caerphilly, the town and community will be awarded its Honorary Quidditch Town status at a later date when the restrictive measures are lifted and the presentation can be conducted safely.

Two fictitious Quidditch towns are also being honoured, Chudley Cannons and Puddlemere United, and fans can pledge their virtual allegiance to any of the thirteen Quidditch teams by visiting the official Harry Potter fan club, Wizarding World (www.wizardingworld.com), to view the banners in-situ and uncover more information about each Honorary Quidditch Town.

Bloomsbury Publishing has also delivered activity packs to local shops to ensure that everyone can celebrate their Honorary Quidditch Town status.

Bloomsbury’s Quidditch presentations follow the unveiling of last week’s Harry Potter statue in London’s Leicester Square, depicting the memorable moment that Harry Potter (played by Daniel Radcliffe) took flight on his Nimbus 2000 broom over the Hogwarts Quidditch pitch for the very first time, from ‘Harry Potter and the Philosopher’s Stone’.

Quidditch Through the Ages Illustrated Edition, written by J.K. Rowling and illustrated by Emily Gravett, is published in hardback on 6th October 2020 by Bloomsbury Publishing, in aid of Comic Relief and Lumos.